When the spring turns to summer and the weather turns cold (that's the life here in San Francisco, of course), my thoughts go toward wine country and the dream of a relaxing getaway.

My Omnivore and I have, neither of us, ever been to Mendocino, so we decided a little time off to explore the Northern Realms might be in order.

To be honest, I know nothing of Mendocino beyond "Murder, She Wrote." So we had only a few hints of places to go and things to eat while up there.  It was enough to keep us busy though. 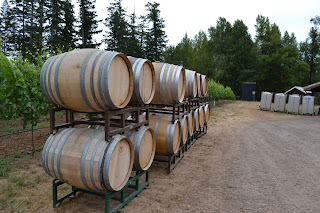 On the way up, we decided to pass through the Anderson Valley and investigate the Pinot Noir situation there.  Without too much to go on, we kinda picked a couple of places randomly.  First on the list was Toulouse Vineyards -- a very cool little family place on Highway 128 in Philo. You might drive right past it if you weren't looking for the little goose signs posted on trees that warn you as you get closer to their driveway. It's the kind of place with a steep gravelly drive leading up to it -- i.e. a place where you won't find tons of tour buses in the parking lot.  We're discovering we like that a lot. 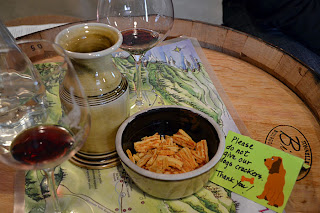 At Toulouse, wine and food pairing is an important selling point, and Maxine helpfully brought us some tiny bits of lemon rind and bay laurel to try with the Pinot Gris. Astonishingly, straight up lemon doesn't kill their Pinot Gris, but works quite nicely with it.  Spices like coriander, cumin might work well together with this one, Maxine says.  Hmmm... we're packing a few containers of Chicken Curry and coconut rice for our dinner, so that's that. 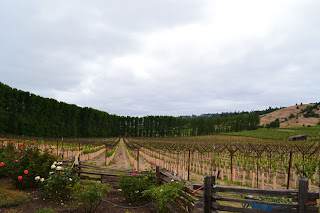 Further down the road, we stopped at Navarro Vineyards. I won't say it was entirely because they had a llama in their field, but that might have been a partial factor...

I skipped tasting to take in the views and try to catch a llama. 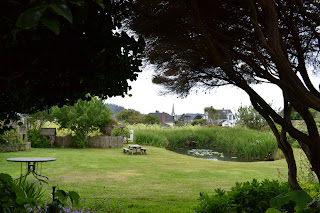 And then we hit the long and winding road for Mendocino, where we were renting a little cottage run by the Alegria Inn near the edge of town.

Mendo is one of those incredibly cute places that generally are not my cup of tea, although I have to admit it was beautiful and certainly quiet. 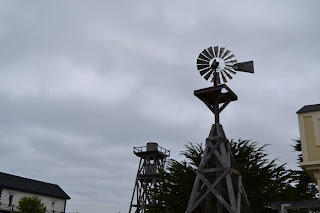 Since we arrived during the week and it was a rainy week at that, we saw precious few other humans around --it was a little too quiet actually. As someone who watches way too much procedural drama, that sort of thing makes me worry about serial killers and evildoers who've retired to the quiet seaside town. 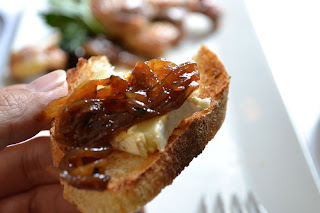 There is a very nice little French place about a block from the cottage that came highly recommended, Cafe Beaujolais, which offers some comforting French bistro fare in a  pretty quiet setting. It's a little on the pricey side, but I have to say, the fact that you can get truly caramelized onions with tasty French brie and a genuinely beautiful duck confit makes it worth the extra. 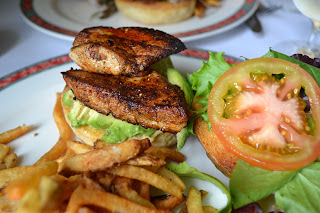 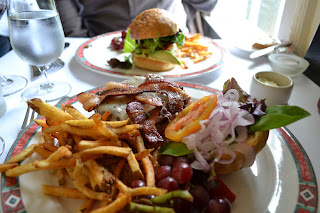 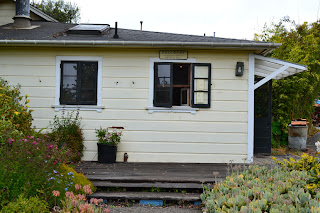 Best of all, behind the restaurant is a bakery where they make the dense wonderful loaves that Beaujolais serves its diners.

We bought a pretty hearty multigrain loaf that was, as they say, "heavy for its size" and had to be sliced thin to enjoy.

By the way, see those gray skies? It rained nearly the whole time we were there.  San Franciscans bring cheerful weather with us wherever we go... 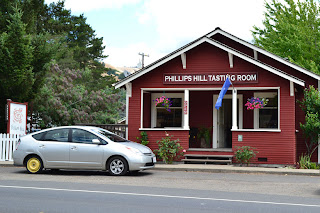 Anyway, pushing onward.  We went back to Philo to troll for more wine, Pinot Noir to be exact and found spectacular examples at Phillips Hill (yes, that's a lot of "l's" and "i's" all together).

It's a bit of our snobbery that we tend toward small, less trammeled places--they often seem to make the most surprisingly good stuff and you don't have to fight a horde of folks off a tour bus at the tasting bar.  Personally, I don't even favor places that have a "tasting bar"-- I really like the "plank over two barrels" model, but there's not a lot of that anymore in California. 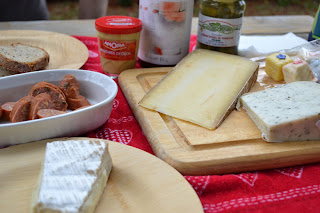 Phillips doesn't really have even a picnic ground, but there is a battered old table out back ("We're glad someone is getting some use out of it!") where we set up our usual lunch of cheeses and bread and sausage. In the photo from left to right are Brie de Meaux, some Jurassic d'Ete, and some Goat Gouda with Nettles.  Yes, we shopped at Gourmet & More before setting out.

Yep, that and some Divine Delight petit fours and I'm good. 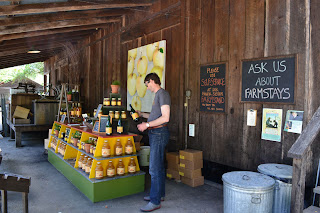 One more stop: Philo Apple Farm.  I wanted to check it out and see if it was a good candidate for a "family-friendly" feature in the Chronicle, but really it's much more of an agriturismo, where you can buy apple cider, or stay in adorable cottages on the farm.

After careful consideration, we selected some cider vinegar and --"Hey!  They have pastured eggs--from their own chickens!" 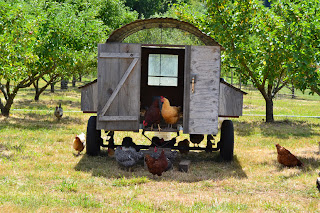 I'm a sucker for chickens, so now we have to go visit the birds, who look quite sassy in their little moveable coop.

"They look happy," I observe to my Omnivore. "Happy Chicken eggs."

Yes, we hustled back to the little honor-system farmstand and recorded our purchase of the last two dozen eggs.  Just in time it seemed, as a bunch of cars pulled up into the parking lot.

"They would've taken our eggs," I remark to My Omnivore, as I fight the urge to hide them under my sweater as if they'd get taken away from me.