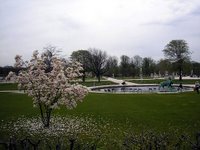 Did you know that Jon Stewart does a global edition of the Daily show??

“Hola!” he says, as he kicks off a half hour of riffing about international news – riots in France mixed with bits I saw back in the US on Tom DeLay. I don’t care – I’ve missed my shot of Daily Show! 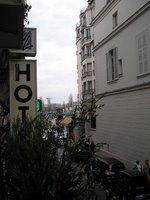 We rolled into the Gare d’Austerlitz at about nine this morning after an unimpressive journey on the Trenhotel from Barcelona
It’s not that the trip was unusually poor, it’s just that with all the buildup about the modern new Elipsos trains and how fantastic the dining car was, I was expecting just a bit more than the glorified airplane fare that they served. Certainly the first class cabin was no more elegant than the one that we had on the trip from Granada to Barcelona. In fact it was precisely the same.

To be honest, I enjoyed the trip from Vienna to Paris far more, even though it was supposedly on an older train. Austrian efficiency beats Spanish style there.

Nevertheless, we got into Paris and checked into the hotel with only a minimum of fussWe’re staying in the 6th near the Musee d’Orsay and we couldn’t resist going out immediately and wandering the city. 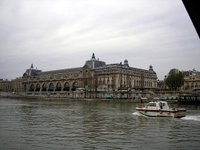 It’s much colder than I had planned for – in fact, not so different from the rains of San Francisco, say I, as I stuff paper towels in my wet shoes and hang up my soaked through socks.

Still, nothing really dims the pleasure of walking around Paris. It’s Easter weekend and we had planned to find most places closed for the holidays, but a fair number of them are still openMost importantly, the Maille mustard store was open, and I went in to get four jars of the special mustards (au cassis, au marc de Bourgogne, au frais, au cognac) as instructed by Eric 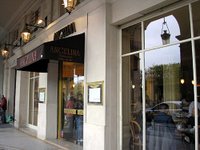 And then we swung by Angelina’s on the rue de Rivoli for a few morsels of chocolate.

But our fave part is going back to L’Ardoise, Pierre Jay’s little restaurant in the 1st (28 rue du Mont-Thabor) with an unbelievable 31 Euro prix fixe menu. 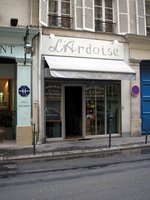 We got there a bit early to catch dinner before going to the Opera Bastille, and Jay came out of the kitchen since there was no one else there and kindly agreed to let us slip in without a reservation. 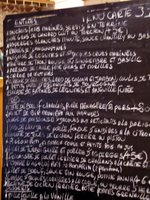 L’Ardoise’s thing is the slates with the menu handwritten on them. Most of the diners these days are Americans who’ve read about the restaurant in Bon Appetit or Gourmet – the waitstaff can be heard always translating the menu items -- but in the five years that we’ve been going there, the food has never been a disappointment. Still it does put a damper on the atmosphere when I hear from across the room an American voice demand, “Don’t you have anything else besides wine? We’ve been having wine for two weeks and I’m a little sick of it.”

Well, darling, are you in the wrong place.

Are we all that embarrassing? I hope not. I mean we did balk at the cow snouts and bull testicles in the Boqueria, it’s true, but for the most part we’ve tried not to have a closed mind about any of the food and I have to say, I think we’ve eaten pretty well. I might have had to avoid the gaze of the langoustines as I dug into my paella or mentally deferred any questions about “that white stuff” as I popped a pintxos into my mouth, but can it be that all of us Americans are so … so… hopeless?

Well, it’s too late to change my order to pigs feet now, and I did order my pigeon rare, so I’ll just have to stop thinking about it. 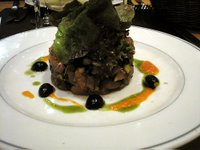 This time I went for the tuna tartare, which had diced zucchini and ginger along with some of his beautiful sauces. The colors on the photos can’t possibly do justice to the bright plate he sends out. 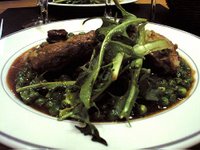 And for a main I had a pigeon roti, with most buttery delicious peas you can possibly imagine. Spring peas? French peas? Peas sent from the gods in return for a human sacrifice? 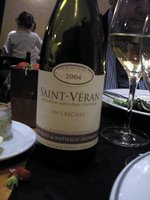 We washed it down with a very pleasant white wine from Saint Veran. 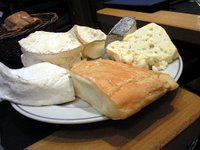 For a finishI had the cheese plate of course!

As we were one of the first to dine, everyone stared at our table as our server set down the assiette de fromage in front of me.

As I helped myself to a nice hunk of Brie de Meaux, I heard the woman at the next table say to her husband, “Well, I know what you’ll be having…”

The meal was MUCH better than the opera as it turned out, which was a bit of an overblown, over-hyped modern commission called "Adriana Mater." I’m still not prepared to enjoy the elevation of the story of the modern common hero or heroine to operatic status.

“Non! Non! Non!” sings the unseen chorus from behind the sides of the stage. I wonder if this is just the best gig for them – no need to suit up, put on wigs, makeup, stretch, hit marks. They just stand backstage someplace and sing, “Non! Non! Non!” and then probably go back to scanning the latest Paris Match. 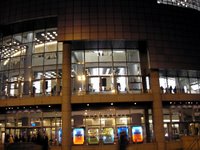 I spend a lot of time wondering how that cool lighting effect is achieved and admiring the cavernous space of the Opera Bastille.

With an hour behind us, and an hour and a half in front of us, my Dad and I decide that we’d rather walk back in the rain than listen to any more Adriana. 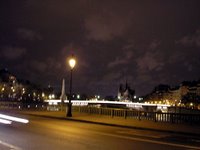 I think it’s much nicer.