Barcelona: I Am a Stuffed Spanish Olive 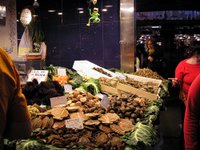 It's a lucky thing that we walk so much on these trips, because I eat so much. I am like a stuffed Spanish olive, like a fat sea scallop, like a roasted pigeon, like a plumped quenelle of miticrema, ...like...like...like...I'm hungry.

You know how Hoer Sipson’s belly bulges fro under his T-shirt? That’s e this evening after a late-night dinner at La Fonda, a lovely little place on Carrer Escudellers near Placa Reial. 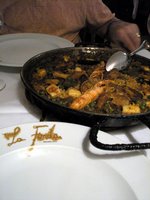 Dinner here in is so uch later than I’ used to, but we ust adapt or starve (!) so finally, after shedding the last vestiges of jet lag and really getting on track, we had tapas late in the afternoon and then trekked out to La Fonda at alost nine-thirty. Of course this place is no secret. It was recoended to e back in 1997 and it’s still the sae, tasty hoe-cooking in an elegant setting, where two can still have three courses with a bottle of wine for 35 Euros.

Then, you ay take y bloated tuy and e out in a wheelbarrow.

We started today out with a relaxed plan which ostly worked quite well. A trip up to Placa Espanya and a stroll to the Museu Nacional dArt de Catalunya (or MNAC) was quite pleasant, especially since yesterday’s clouds oved off, giving us the bright sunlight ixed with cool Mediterranean breezes. 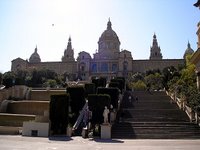 The MNAC is up on the top of Montjuic, a reclaied area that had been set up for the 1929 Exposition that u... didn’t do so well after the stock arket crash. But Montjuic was used for the 1992 Olypics and it’s a pretty classy looking hill now, especially the MNAC part, which is like a giant palace.

After clibing the stairs to the top we paused for the spectacular view back over the city, as a Spanish guitarist strued away on the steps. 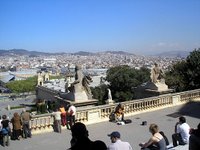 In the distance you can see the church of the Sacred Heart perched up on the Tibidabo ountain and in the haze, the ever present looing spires of the Sagrada Failia lurk with attendant construction cranes. Then there’s the curious cigar-shaped building we see lit up at night. It looks a bit like the “Gherkin” in , but a blue gherkin.

Inside the MNAC is a fantastical array of art – everything fro reconstructions of Roanesque church interiors that are a thousand years old, to El Grecos and Titians. It’s a bit of a ishash, but a really pleasant one.

Of course, by this tie we’ve worked up an appetite and so it’s a stop at the restaurant. I’ starting to feel a little self-conscious that every tie I start a conversation with an adittedly accented, “Si us plau, voldria una…” they hand us an English enu. 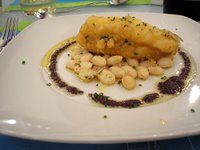 After seeing all the cod in the Boqueria yesterday, I decided that it has to be cod, which I have to say is delicious, but I find a little bit chewy. Maybe it’s the curing process. The kalaata olive stuff drizzled around the edge of the plate though is terrific.

Fro the MNAC, we walk down to the Miro useu, conscious that we’ve been whiling away the afternoon and now we’re cutting into siesta tie. Still, we take a couple of hours to go through the useu, which is full of unruly student groups. I have a feeling Miro would have liked their sort of dedicated unruliness though. The useu is filled with fanciful pieces that span his career, fro the giant tapestry to sall sketches. One I found ausing was his orphing of his own nae “Miro” to the word “Mierda.” 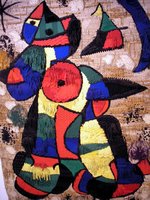 My Dad calls this one "The Bunny."

There was also a fascinating sculpture by Alexander Calder called the Mercury Fountain, part obile, pushed by the otion of a large pool of liquid ercury. (No health hazard there…) It’s not soething you see often and I have to say, the running of the ercury is incredibly eserizing.

Fro the Miro useu we trotted down to the traway, where we braved the wait and the vertigo to ride down the airtram to the Port Vell. I’ve always wanted to ride on the thing, but I have to say, they always warn you not to look down… Don’t look down. 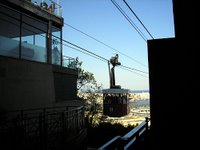 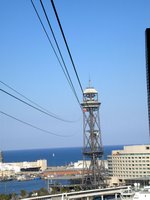 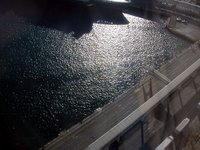 A brief siesta at the hotel and we were ready to venture out to the Rablas again for dinner. La Fonda is still as popular as it was back in 1997, and the line still stretched along the side. And it’s still worth it. 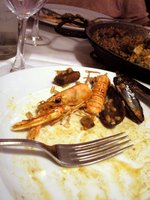 There was a plate of those lovely little eaty garlic olives to start and we were off and running. A red pepper spread on toast with savory greens and a gigantic paella that we couldn’t possibly finish was the bulk of our eal. Is it e, or are the langoustines staring at e? I have trouble with food that watches e.

The rest was delicious though, and put e in ind of the Boqueria again. Toorrow, I think we have to begin to gather our food supplies. 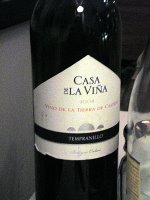 With dinner we had a Castilian wine which I chose because it was ade fro Tepranillo and very hearty/tasty. And to finish it all off, we shared a crea catalana, the local version of crèe brulee. We ate it before I could even get the caera out.

hhmmm.... I had Cheerios for breakfast and toast and packaged prosciutto for lunch. Dinner will probably be toast and soppressata. Boy I've got you beat!....or not. :-(

Um...maybe not beat... you ARE getting one serious bundle of food items, by the way....