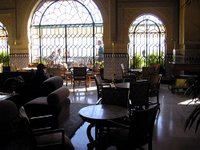 I think that you can never look down the road at the prospect of 22 hours of traveling with equanimity.

Every trip these days is not just a combination of planes, trains and automobiles, but also checkpoints, lines and lugging. Oh, and lousy food. But off we go, blithely by, lured by the promise of adventure and some good rates on airfare.

Now, I wouldn’t want this story to become a chronicle of the airports I have seen, but honestly, I just couldn’t help comparing some of the experiences I’ve had in the last 24 hours with each other.

OAKLAND
I’m taking JetBlue to New York to meet up with my Dad.Together we’ll continue on to Madrid then Granada.

At Oakland, I’m braced for the worst – the last time I did this, I waited in a security checkpoint line for literally 1.5 hours. The line snaked around the baggage carousel before gently eandering up a rap and through a food court. This tie however, to y great surprise, I speed through the check-in kiosk, thanks to pre-printed bar codes, and walk straight through without stopping to the security gate.

I’ve becoe really quick at the Security Striptease: coat, shoes, phone, laptop…in the bin, carry-on on the belt, tiestep through the security gate … carry-on off the belt, shoes, coat, phone, laptop back in place. Yank out the handle to y rolling luggage and I’ off again. I could ake a ballet out of it.

What does “Pasteurized Process Cheese Spread, Havarti-type Flavor” really ean? If I dare to let this pass y lips, will I not be peritted near any real cheese for the rest of y trip?

“I’ not allowed to have a caera in the building?” I say incredulously, thinking, You have all these people going off to vacation and you think you can ban caeras? I decide that it’s not a terrorist thing, it’s just that Delta is so horribly ebarrassed by its utter state of decrepitude.

I eet up with y Dad at the gate and together we go in search of soething to eat, and settle for a Sa Adas at the sports bar, since nothing else at the airport looks worthwhile.

The flight passes quickly, though, as I can actually sleep in these seats (15A and 15B in a Delta 767 if you’re interested) and we land in with only a iniu of turbulence, and a axiu of sneezing/runny nose. That’s a thing with e on planes…

: The terinal for Delta is dingy again and confusing. We don’t know where to ake our connection, we’re wandering through passport control, y Dad’s feet hurt and I’ running out of Kleenex. We get soe assistance though, fro a soewhat pereptory woan, who puts us on a bus for T4, which apparently eans Terinal 4.

Now this isn’t at all like the onorail experience. The bus loads up at the terinal and then gets on the highway. Uh-oh, we think, are we, like, going the right way?

You have to hand it to the Spaniards. When it coes to architecture, they go for the gusto. The terinal is odern, airy, and yet welcoing and organic, and it is unbelievably huge. It’s a good thing our layover is a long-ish one, because we need tie just to wander around and gape at the place, and sell the new wood slats.

But we’re not in for the airports, no atter how cool they are. We’re en route to , and after a puddle jup to the , we ake our way with soe relief to the hotel.

Our roo, which faces out to the city is lovely, and you feel like you can have just a sip of what the Moorish kings of ust have lived with every day. 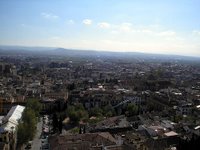 Here's the view from our window... It's good to be the Sultan.

Now, I had iagined that we’d rest a oent when we got in, but to y surprise, y Dad wants to drop off the bags and bound out the door iediately. I feel very old, and slightly broken. Maybe it’s just that sort of jet-lagged ipression that y brain is partially lodged on y kneecap.

We head up the hill, to investigate where the entrance is:

And down the hill to get to the city center:

I have to say, as uch as I was dragging, I couldn’t help but just appreciate how beautiful this place is. Driving fro the airport to the city, the dry, dusty terrain looks not too dissiilar fro , right down to the prickly pear cacti on the side of the road. But up here, there are green forests, and lovely lilacs hanging fro eaves. People have quiet gardens and shady orange trees. 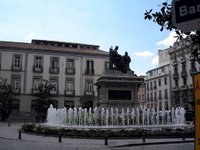 We take a long route, as it turns out, around the university, past the plaza where Queen Isabella is forever handing Christopher Colubus his charter, and up to the Plaza Nueva, hippie hangout and people watching spot extraordinaire.

It’s basically siesta tie, so nothing uch is open in the way of shops, but we settle into a table at a café and order soe drinks and snacks to get into the spirit of the Spanish tepo. Everything is so easygoing – even the clouds have oved off and the only one doing any running is the fountain.

We wander around the area a little, braving herb wielding gypsies to pass the Royal Chapel where Isabella and Ferdinand are laid to rest. And then ake our way back through the Plaza Nueva, up the sall side street to the Puerta de las Granadas – an ancient entrance to the fortress -- to head up the hill to the . 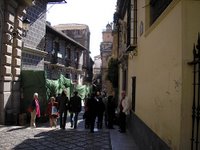 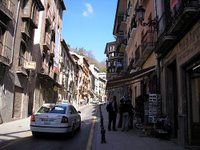 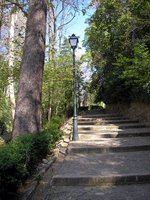 Around 9 or so we got up and headed back out, since, you know, now, people are out for dinner…

Wandering down the road that took us into the plaza, we passed hopelessly atospheric places like the lone guitar-aker’s shop, fro whence issued the sounds of Spanish guitar playing 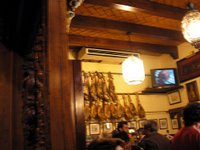 All fine and dandy, but what, you ask, about DINNER?

Well, in an attept to keep ourselves on Spanish tie, we wandered back to the Restaurante Sevilla, recoended in so any guidebooks that there are now only English speakers in the dining roo, though there are Spaniards bellying up to plates of dark Jaon Iberico in the bar. Still, the food sells great, and we’re hungry and looking for soething yuy.

My Dad deurs at the Sacroonte tortilla -- a house specialty oelette that Garcia Lorca reputedly favored when he patronized this selfsae establishent, and which apparently features lab brains and “criadillos.” The latter I have a vague eory of eaning, “bull testicles.” 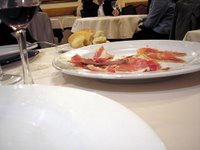 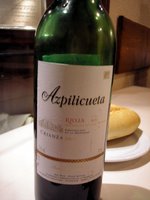 We ordered a plate of Serrano ha (I’ saving the jaon de Jabugo – bellota reserva for when I’ ore likely to reeber it…) soe Rioja and a paella sevillana for two. You know what? We were fine with no criadillos.

Stuffed after dinner, we wandered back up the hill at when we heard a ad tolling fro the bell in the tower of the Alcazaba. “ service? Warning bell? Tsunai?” I thought, as we oved closer. Suddenly I could hear the sounds of a band, drus and brass, playing a dolorous, slow dirge at full blast and the sell of incense drifted past us. 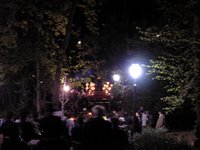 Topping the hill, we found that just beyond our hotel, there was a procession coing along the paths that lead to the fortress. At the front, high on a palanque and encircled with chunky candles was a Madonna statue. A crowd was following the Mater Dolorosa along with the band and as we watched they rounded the corner to head up the hill, like a surreal panoply, barely visible through the trees. Holy Week has begun.