Orion on the Night sky and more fun coming soon...

I've been a little busy lately -- so I've not posted in a little while, but, dear reader, fear not. I will be hopefully sharing some incredible food experiences, as I tour Europe starting on Thursday.
Look for news on culinary adventures from Granada, Barcelona, Paris and London. 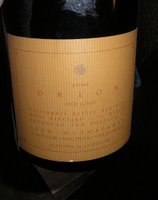 In the mean time, Eric and I celebrated the fifth anniversary (of meeting each other) with a bottle of wine we've been hoarding for five years: Sean Thackrey's 2000 Orion.

Oh. My. God. If every red wine I had ever tasted was like this, I would never have touched a white.

Like a NeverEnding-Gobstopper it changed all night long. One thing out of the bottle, and minutes later it was different. We had it with a peppered steak with brandy cream sauce-- I'll let our resident wine expert explain how it tasted on his blog, but it was incredible heady stuff. And then later, with our cheese course, there was something difficult to identify in the back of the nose.

"Eucalyptus!" I said triumphantly. Sean's wines sit in his backyard in a lovely grove of Eucalyptus trees near the cliffs that overlook Bolinas Bay.