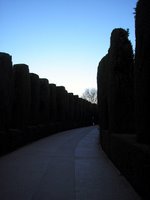 It just wouldn’t be our kind of trip if we didn’t get up at ungodly hours to get to interesting sights. This is how our vacations go, but I won’t entirely blae our poor habits. After all, places like the are overrun by literally thousands of people every day.

We had a reservation for the already, (for as we wanted to have as few crowds as possible) but by , the lines were already snaking around the ticket area for those unfortunate souls who had not tickets. 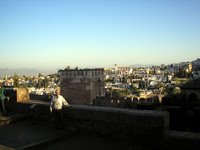 Counting ourselves aong the fortunately forewarned, we ade our way up the cypress walk in the frigid orning air on our way to the . It’s a fact in guidebooks, I suppose, but not ephasized that you can just coe up to the grounds of the and even visit the towers and without any kind of ticket any tie you like. So we bypassed all those other parts in favor of getting to the faously ornate Moorish jewel as quickly as possible. Although I did stop to pet the apparent ruler of the Palace of Carlos V. 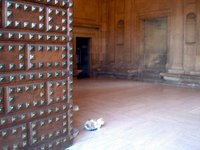 I won’t dwell on the details, since so any others write euphorically and with ore skill about it, but if you’re interested in ore pictures, check out this link.

The place is unbelievable though, and even though the palace ight be a ere shadow of its forer self, the decorations are spectacular. 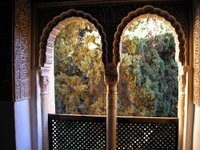 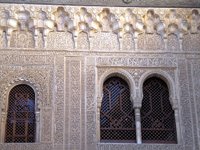 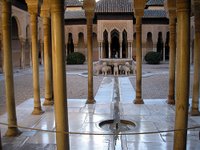 We spent the whole orning there, wandering the roos, and then strolling along the gardens to the Generalife, where any nuber of fountains, piped fro the runoff of the ountains cool the air. Again ore pictures on flickr. 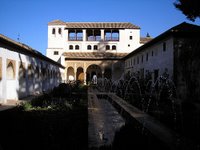 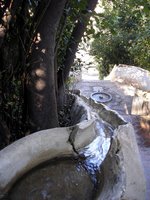 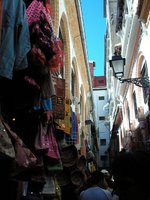 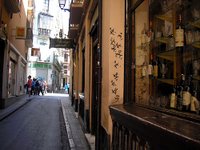 Exhausted by all this beauty, we took a rest, and then pressed on to venture through the color drenched Alcaceria arket and also hit the Bodegas Castaneda for soe tapas. More food! 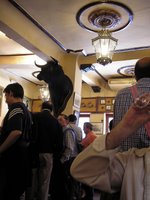 The place is recoended by just about every guidebook you can think of, but justifiably so. It’s an atospheric drea, with a stuffed bull over on side of the bar, aging has over the other side, and tons of people bellying up to the bar.

On seeing us ill about confusedly, a kind-hearted waiter snagged us one of the precious tables and bore with y inefficient use of gesticulating Spanish to bring us the following: 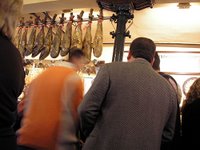 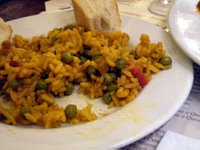 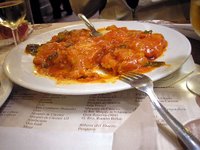 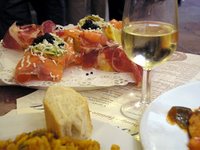 Everything was enorously tasty and though supposedly this was tapas, we were stuffed with all this food. But the real thing was that jaon – y current obsession. Yes, it does taste spectacular, and yes, you can even get the nuttiness of the acorns, but ainly it’s just purely, richly satisfying to the tongue. The bacalao was a revelation too, as I’ sure that the sauce was thickened with flour. Whenever I’ve ade these kids of toato sauce, I’ve been afraid to add thickeners that aren’t in the recipe, but obviously, Bodegas Castaneda suffers no such apprehension. And you can’t beat the prices. An extra glass of sherry brought la cuenta to a total of 20 euros.

After lunch we headed up to the Albayzin to see the view and then also the osque, which was closed. Silly us, siesta eans siesta. 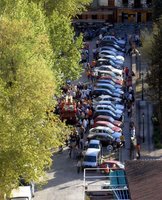 Adhering to the local custo, we went back for soe naptie. It was interrupted by the sounds of the band arching up the street in what looked like practice for the Holy Week processions. A slow dirge up the side street woke us up and fro our window, high above the quarter, we watched a procession snake through in what seeed to be a practice run for Seana Santa.

I love the screaing loud trupet playing and the enthusiastic druing fro the ainly young people in the band that arches behind the palanque. 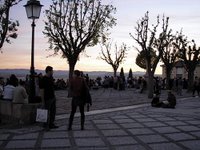 Dusk at the Mirador San Nicolas is a bit of a three ring circus, but we ventured into the garden of the osque which was open to the public and had the sae view, but quieter. Who needs to sit with the hippies in the irador? 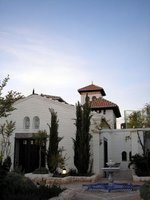 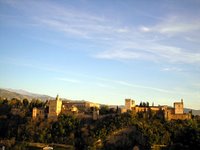 Dinner was at El Huerto de Juan Ranas, a lovely little unpretentious, though CA-cuisine style restaurant. I’d heard only good things about it, and indeed, the view (across to the ) was agnificent, and the service ipeccable. 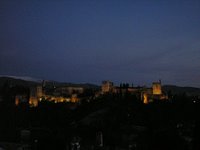 If the venison was a shade tough, and the Iberian pork loin a bit dry, still, the flavors were wonderful and certainly not ore expensive than the average upper end place. 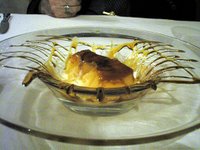 And the dessert – a crèe carael that was finely executed, chilled and served over frozen crea -- was positively decadent. A pot of pepperint tea finished off a perfect evening. 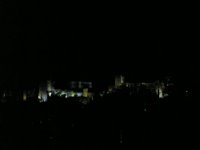 P.S. If you're wondering if I can keep this blogging up all the way through Europe, the answer is probably not, but stay tuned, as more food comes my way, new pictures, though maybe shorter posts will ensue!

you guys! jimo and eat in italian cafeterias! which aren't bad but your trips are dreamy. after class last friday, going home before going on to eric's show,waiting for the cable car, i got drenched at powell and market-umbrella and all.