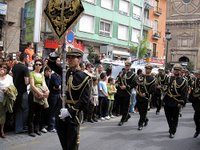 I’ll bet that Salvador Dali knew that Surrealism has nothing on real life.

As we wandered away our last few hours in Granada, we decided that we should take advantage of seeing some of the Semana Santa or Holy Week processions that dot the city on Palm Sunday. Turns out, you really can’t get away from them. 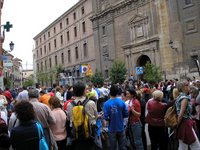 I had thought that Holy Week was a big deal in Sevilla, but not a major production anyplace else. Um…no. Holy Week is an all out, ten day, grand theatrical affair that puts Las Vegas to shame. 50 processions, each bearing different lovingly crafted highly ornate barques of scenes from the Passion or macarenic Madonnas. Casts of hundreds, costumes, incense, popcorn, peanuts, get yer red hot peanuts! 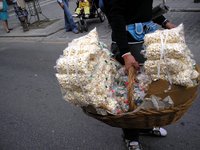 We walked down to the Church of Perpetual Soccorro, where the first procession was to start in the afternoon – they call it Burraquillos and of course, it depicts Christ entering Jerusalem, since it’s Palm Sunday. The crowd slowly gathered, but by the time 4:30 rolled around, there was a circus-like atmosphere. A guy passed us with an enormous basket of popcorn and peanuts and the kids perched along the parade route on the curb.

It’s a little freaky to me that the penitents are all dressed in what look to be KKK hoods – pointy with eyeholes cut out – but since they predate the KKK, I guess I just have to get over the fact that there are literally hundreds of penitent homies roaming the streets.

Each parish has its own theme apparently, complete with special costume colors and particular music for the band to play. This particular one, of the five parades that were staggered throughout the afternoon, was in royal blue and white and commanded hundreds of hoodies, plus mini-Hebrews and widows in black mantillas, plus three marching bands and of course the fifty or so guys who have to carry the barques. If you're interested in finding out more about the little screaming cornets that the bands play, check out this link. 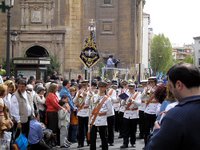 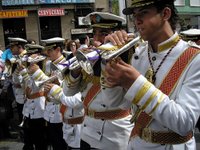 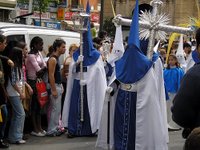 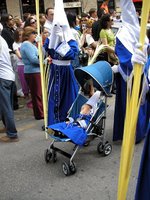 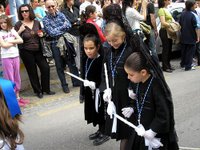 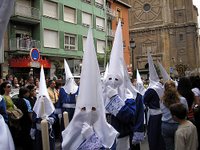 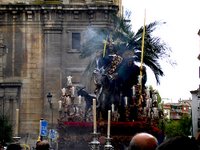 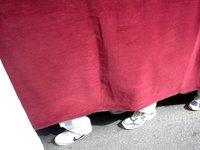 As the door to the church opened and Jesus on a donkey, plus set (literally the size of a barn door), navigated out, a cheer went up and the shuffle had begun. The band played something of a dirge-speed tune, and undoubtedly I can see why this parade, which treks through the city for about eight hours, takes so long. Poor Jesus was going to have to hold that blessing hand up for a while, and the fifty guys are going to have to hold up the 2 ton float the whole way. 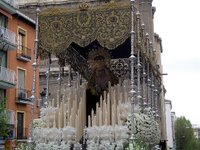 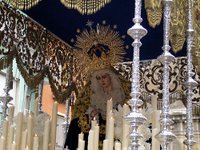 The bigger cheer though, goes up for the Madonna, which just goes to show you that the cult of the Virgin is certainly not going away in Spain. Clothed in blue velvet embroidered with gold and surrounded by a mass of burning candles, she’s an impressive sight. 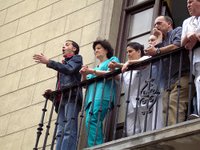 Just as the Madonna gets to us, the procession stops and they put down the barque. High above us, a man who’s obviously a flamenco cantaor, watching from a balcony above, starts to sing a piropos dedicated to her. The crowd goes hushed and there’s only incense and a flapping of her robe in the wind as he finishes his song and everyone breaks into wild “Oles!” The bearers pick her up again (with the canopy swaying dangerously), and they continue down the street.

“But isn’t this blog about food?” you ask. Okay, I’m getting to that. 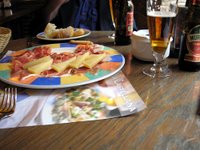 So, we watch the whole operation take place and then make our way around the cathedral, through the crowds, stop to shop for souvenirs, over to Plaza Nueva and are just in time to see the whole procession coming down the street. We ducked into a tapas bar, ordered (what else?) jamon y manchego, and kicked back with a Murphy’s Irish Red cerveza for a really terrific view of the parade. How sacrilegious. 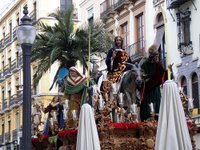 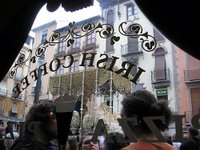 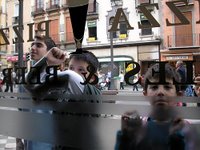 But we’re not the only one’s interested in the secular. A few kids peered in to see if they could get the football score on the TV behind us…

We waited long enough to watch another parade pass us by – this one with red velvet hoods and a barque depicting the sentencing of Christ. 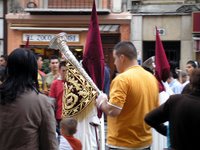 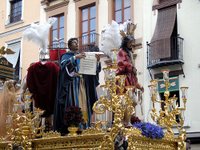 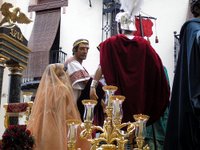 “So can I get OFF of this thing already?”