Back from New York Holidays 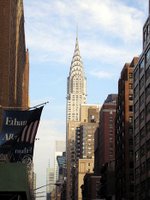 Well, we've returned after a week in New York and a marathon weekend of clockmaking -- more on that later.

But there's a lot to catch up on from our trip!

Every year we go back to visit family -- Christmastime is one of my favorite times in New York. This year it wasn't bone-chillingly cold as it has been in past, but it was a bit wet. Not that we from the Western states are unused to _wet._

Anyhow, this time we stayed at a modest place down in Murray Hill, a couple of blocks from the area that's chock-a-block with Indian and Pakistani places nicknamed "Curry Hill." I often think it's so funny that there's so much contention between India and Pakistan, but here in New York, the cuisines live together under the same roof with no difficulty.

We happened on a place called Curry Leaf which had one of those great New York bargain lunch specials. $10 for all this. 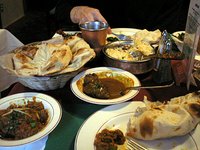 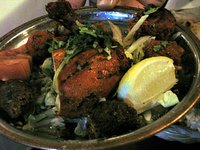 plus Garlic Naan (my favorite) 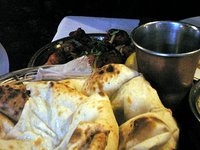 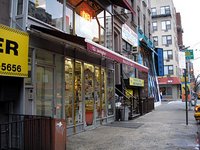 It was the perfect antidote to the wet and rainy. Curry Leaf is associated with a shop called Kalustyan's, which is a few doors down and has a world of spices. Its a bit like the shop Bombay here in San Francisco -- bags and bags of all kinds of fabulous goodies. Dried herbs, sauces, mustards, peppers, salts -- we even found the curing salt we searched so desperately for to make the corned beef last month. 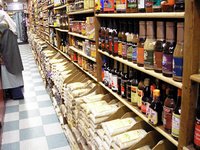 The place also does catering, and all kinds of other prepared foods. We spent about a half an hour wandering around the shop, which, like most New York stores, stacks its wares on shelves higher than Eric. Floor to ceiling yummies. Mmmmm...

Among our other food related discoveries was Waldy's Pizza, a new gourmet place near the feather and sequin shops of the lower fashion district. Eric had been on my case about how there were no good eating hangouts of moderate price in New York -- not the way there are in San Francisco. You know, the usual California complaints, "No fresh arugula? Are you kidding me?" "Where the heck is the section for Zinfandel?" "What, you call those avocados?"

Well, Waldy's makes the case for a better eating environment. The chef of the title, was the guy who used to make pizzas for the Beacon, and he's brought gourmet and fresh herbs to his own place. We chatted with his son who suggested a half and half regular pizza: Wild Mushrooms and Onions (The Beacon) and Hot Sausage with Roasted Red Peppers. Oh yeah.

We settled in sort of oddly cheered by the wood fired oven in the back. I imagine that it's the kind of place that's packed for lunch, but it was nicely quiet and relaxed in the evening.

"If we lived here, you'd have at least these two places to get some lunch,"
I observed.

For my birthday, we went out to a fabulous little steak house that my Dad discovered. He is always one for a wood burning fireplace and this place, Keens Chophouse, has a lovely, cozy, warm room where you can feast on a mutton chop the size of your head (no joke!).

Dad and I ordered a mutton chop each (silly us!). When they arrived they looked like Brontosaurus chops. But man, were they good. We ate about one third of one each.

Eric ordered the New York Strip which was not quite a brontosaurus chop but still enormous. (Are they getting these cuts from Texas?) Oh so good -- and the side dishes were perfectly delish. The creamed spinach has to have been the best I've ever had, and I don't like creamed spinach. And hash browns -- I do love hash browns and it was sort of my salute to the latkes of the first night of Chanukah.

Keen's is also decorated with hundreds of clay pipes and my Dad, who has a fondness for pipes, got one of the longstemmed ones. 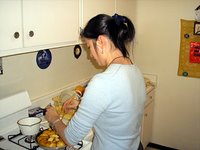 For Christmas, we made dinner at my Dad's apartment, and since I had spotted some lovely Braeburn apples I made the Tarte Tatin. This is me making the Tarte with chopsticks. LOL.

My Dad, being very much the bachelor, doesn't stock heavy duty cookware, so I made do with what was on hand. You can do a surprising amount with a saucepan, a non-stick skillet and some chopsticks. Our menu also included lamb, green beans sauteed with garlic, a roasted butternut squash and buttermilk biscuits. 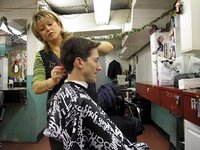 In non foodie related items: There are more pics from New York -- this trip our obsession was with Art Deco buildings. By the time we came home we had walked so much we were positively exhausted. One day we walked from Murray Hill to the Village, where Eric got a haircut at the famous Astor Place Hair (with Bella, who also cuts Mark Green's hair -- "once every four weeks," she says) and then back up to Grand Central Station where we watched a laser show on the newly restored blue and golden ceiling of the main waiting room. 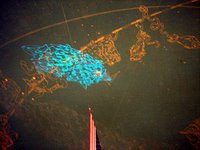 Grand Central is indeed beautifully restored. I can only vaguely remember it as a kid. One of my friends and I once cut school and wandered around the city and this was one of the places we went. I don't remember ever seeing the amazing zodiac paintings on the ceiling. 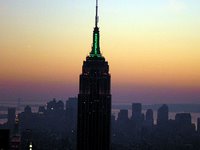 For the bird's eye view, we went up to the Top of the Rock -- an expensive, but quite satisfying expedition. Not for the silly videos and the feeling that we were being constantly herded (and we even had to go through a security checkpoint yet AGAIN! Terrorists beware -- you shall not destroy our Swarovski Crystal Ornament shop!) 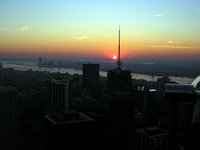 Still the view was really quite something -- it's one of the things I love about New York. We stayed up there til sunset and watched the sun go down over Jersey.

On the artsy side, I also have to put in a mention of the new Broadway production of "Sweeney Todd." What a blast. It's a kind of Brechtian show in which the ten cast members not only play their roles, they also form the orchestra (cellos, piano, trumpets, they each play one, two and three instruments), and they serve as the crew -- moving the props about the sparsely decorated stage.

Patti Lupone and Michael Cerveris are scintillatingly creepy as the leads, Mrs. Lowett and Sweeney, but the entire ensemble puts the show over like clockwork. Not a missed cue or misstep that I could detect. Now that's theater as it should be.

Speaking of clock work, Eric and I spent the New Year's weekend working on a paper clock. Yes, made of paper and glue and it works! Check out pictures here.

Fascinated by your paper clock. Is it your only clock or are you regular clockmakers?

Thanks, Richard! We're not at all clockmakers, but my husband loves watches and we wanted to learn a little more about how they work. I had tried to make this clock before unsuccessfully, but this time we got all the way to the end.

We thought it was an appropriate project to do on New Year's Eve while we stayed up til midnight. As it turned out, it took us all weekend!

By the way if you're interested in seeing more about it, we have a website (still in progress) here.

I saw your post on curry leaf and went there with a friend recently (dec 07). But I was disappointed. Maybe because it was during the dead hours (late-late lunch) but the food tasted heavy-handedly spicy and...just boring. My friends, who were starving, were happy, but I expected more from a place where the entire curbside had yellow cabs parked in rows (it's curry hill, indeed). That was the highlight for me, not the food, unfortunately.

Oh -- that's so sad! I was there over Christmas and had the specials which I liked (maybe my taste has turned to heavy-handed spice since I've been here in SF). It is funny, though, isn't it, how cabs line up near there?