We Conquer the Paupiette 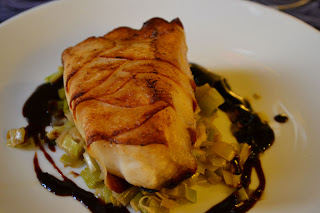 It's been a busy week, what with shows and a visit from my Dad (more on that later), but I didn't want to let too much time pass by without noting that we have at last conquered that !#%!$#! Paupiette of Sea Bass of Le Cirque fame.

Long-time followers of my blog will note that we have been trying to recreate this damn dish again and  again and again since late 2007, with no success and much cursing of potatoes.

Well, we had a wonderful friend over for dinner before her move to the wilds of Steamboat Springs, Colorado, and since she's an adventurous soul, we thought we'd give that !#%!$#! Paupiette one more try.

This time I did a lot more due diligence to figure out how exactly that potato wrapping was supposed to happen. I got some more tips from blogs and armed with a Börner V-slicer that makes potato slices so thin you can read through them, we forged ahead.  Here is Daniel Boulud's original recipe, which we adjusted slightly as follows:

Heat the oil in a medium saucepan. Add the shallots, mushrooms and thyme and cook over high heat for 10 minutes, stirring frequently. Add the stock and boil until the mushrooms are almost dry. Stir in the wine and boil until reduced to 2 tablespoons, about 30 minutes. Stir in the cream and bring to a boil over low heat. Whisk in the butter and sugar and season with salt and pepper. Strain the sauce through a fine sieve, pressing on the solids, and keep warm.

Trim each of the sea bass fillets into a 5-by-1 1/2-inch rectangle. Season with salt, pepper and the thyme.

Using a knife, slice each potato lengthwise to remove the rounded portions and make a block shape; do not cut off the tips of the potatoes, but do peel them. Using a mandoline, slice the potatoes lengthwise into very thin slices. Brush the slices on both sides with the melted butter and season with salt. This is important, don't rinse the slices or anything, just toss them in butter so they don't turn brown. The butter will also help the slices stick.

For each paupiette, on a 10-inch sheet of wax paper, arrange 8 slightly overlapping potato slices to form a 5-inch wide rectangle. Here's what isn't explicitly said: the slices should be placed with an overlap of at least an inch. So slice #1goes down (with the long side "landscape" orientation in front of you) and slice two is placed in the same orientation next to it, but overlapping about an inch or so. Slice #3 goes above Slice #1, overlapping it slightly, then slice 4 goes next to #3 overlapping an inch or so. This continues for 8 slices of potato. There should be an "interleaving" effect where ends of the slices meet. That is, don't put down a column of 4 slices and THEN try to place another column of four slices beside the first because the ends of the potato won't stick together as well.

Use the wax paper to help seal the potato wrap around the fish; remove the paper. Personally I think you should leave the paper and just wrap up the paupiettes in it. Repeat to form the remaining paupiettes. Cover and refrigerate for up to 2 hours. Refrigerating is key.  They need at least 30 minutes to settle in the right shape.

In a medium skillet, melt 2 tablespoons of the butter over moderate heat. Add the leeks and cook, stirring, until softened, about 15 minutes. Season with salt and pepper and keep warm.

In a large nonstick skillet, melt the remaining 2 tablespoons of butter over moderately high heat. Add the paupiettes and cook until the potatoes are tender and golden, turning once with a large spatula, 8 to 10 minutes per side.

Spoon the leeks onto 4 warmed serving plates and ladle the sauce around them. Set the paupiettes on the leeks and top each one with a thyme sprig. Garnish with the chives and serve. 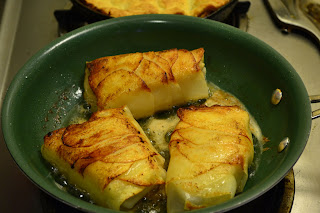 I have to say, that making this was completely easy, ONCE you figured out how to do it.  But if you didn't know how to do it beforehand, it's such a frustrating dish.

The paupiettes themselves are fantastically tasty -- the crisp potato shell makes a fabulous contrast to the meaty white sea bass inside. And the wine sauce is just heavenly.  Do note that the wine sauce is best when freshly made.  If you're trying to get ahead, make the sauce all the way to the place where you've reduced the wine to about 2 tablespoons of concentrated flavor.  Then store that. when you're ready to serve it, continue with the addition of cream and butter and serve immediately.

Nice blog.. Thanks for sharing this information with us

Thanks so much! We were just so happy to finally ake that dish in a recognizable way!