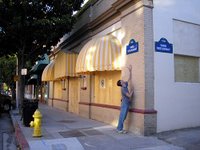 Wherever we go, there we eat.

Agritourism is big these days, or so I hear. Of course, I didn't even know it was called that, we're just irresistibly drawn to food-related activities.

When we talked to people about going to Paso, there was a blank look -- the "what will you do there?" kind of look. Well, plenty as it turns out.

Paso isn't Paris, but it's not quite the sleepy little hamlet you might think. It even has a nice French restaurant. No, not this one -- Restaurant Paris, which we had read about. We discovered they were closed, sadly. 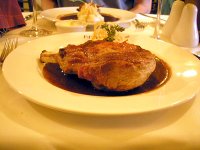 We arrived on the day that France played Portugal in the semi-finals of the World Cup, and chef Laurent Grangien was quite happy to tell us the results. 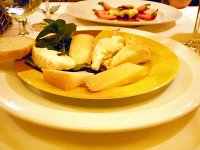 And of course, they have a cheese plate. The waitstaff seemed confused when I asked what the cheeses were.

"Well we have many cheeses and the chef chooses some each day."

The maitre d comes over. Repeat of above conversation. I decide to put them out of their misery and just order the cheese plate. When it arrives, he kindly informs me that it's Saint-Maure de Touraine, Comte, Tete de Moine, Pont l'Eveque, Reblochon and Etorki.

"What?" I say, not quite understanding the last cheese name.

"Oh, the Basque mountain cheese," I say. As the words come out of my mouth, I'm wondering, Where the heck did that come from? I've never had Etorki in my life. I'm starting to scare myself with this cheese stuff.

(Etorki is quite delish, by the way, although Eric went into rhapsodies over the Tete de Moine. Since seeing one in Milan, I've always wanted a girolle, the thing they use to make beautiful rosettes of Tete de Moine.) 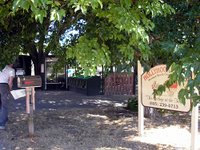 Anyway, onward. I had read about a roadside organic farmstand in Templeton called Hollyhock Farm, where you can get seasonal vegetables and fresh eggs. It's all on the honor system, so consumers are expected to choose their produce and then check the prices, weigh, and slip some cash into the little slot on the stand. 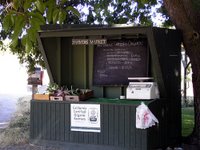 Apparently you can also do a farm stay there, although we didn't roam too far in, feeling a little shy about tromping about on what was clearly someone's front yard.

I was also a little bummed that only cucumbers and onions were in season and the eggs were all gone, but we selected some onions and bagged and duly paid. Honor code was big at my college and I like the idea that someone comes into this relationship already trusted. 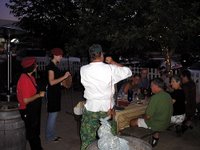 After a dusty day, we retreated to the hotel to take a shower and then drove ten minutes to San Miguel to eat at a crazy place that we'd heard about called the Tenth Street Vineyard Cafe.

The establishment of Dallas and Caren Holt, this is one crazy little farmhouse. You call ahead (definitely call ahead, reservations are essential), and arrive to find yourself in what looks like someone's living room. A prix fixe ($24.95, cash only), nine-course Basque feast is served family style in a raucous atmosphere only encouraged by Dallas, who makes everyone in the place drink sangria from his bota bag (a Basque wine skin). And I mean everyone. I'm not kidding. 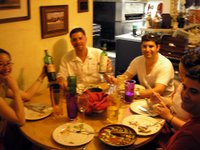 Our table was the place to be that evening, as we had three Basque brothers, who brought a Rioja, a bottle of pacharan and a load of great stories. Fermin was celebrating his saint's name day -- and the opening of Pamplona's San Fermines, known to the rest of us as "the running of the bulls."

The pacharan was a big hit with Dallas, who came by for a sample, and then returned for another sample to share with a rowdy bunch of winemakers in the next room.

"Great stuff!" he exclaimed. "What is it made from?"

Pacharan, or patxaran, is a liqueur and according to Wikipedia, it's made by soaking sloe berries (like those used for gin) in anisette with a few coffee beans and a vanilla pod for several months. It's apparently not easy to get a hold of, although up here in the Bay Area, K&L Wine and Liquor carries it. Makes a lovely digestif after the meal, which was enormous. 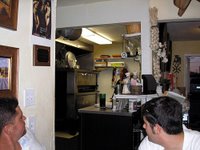 Everything comes out of this little kitchen. We were so intent on pacing ourselves foodwise, that we literally forgot to take pictures. Except for the one below of the sort of Basque shepherd's pie.

Tapas, soup, migas (a kind of spiced bread crumb dish that Fermin and David informed us is usually a peasant shepherd dish), paella, the food just kept on coming. 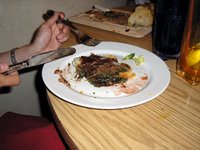 By the end of the night, I needed a wheelbarrow to cart me and the nine courses back to the hotel, where I flopped onto the bed in much the same fashion as the elephant seals of Piedras Blancas. 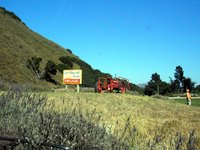 The agritour continued with a stop at the "little charming farmstand" that made Earthbound Farms so famous, just off of Hwy 1 before you get into Pebble Beach. 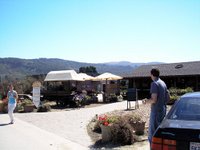 Earthbound's success as "organic gone big business" has gotten some coverage recently. Steve Shapin's recent New Yorker article "Paradise Sold" really made me think about this whole organic movement and what it means. 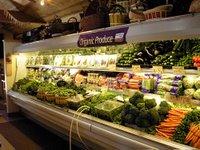 On the one hand, people are eating a pesticide-free, healthier vegetable, but on the other hand, this brand of "organic" is grown on vast tracts -- 26,000 acres of land total -- and they truck those nice plastic packages of washed lettuce off to the 50 states. Here, "organic" doesn't follow that one key part of the organic philosophy -- it isn't local. Nor is it cheap. This is exclusive stuff, being sold to only those consumers who can afford that kind of lifestyle. 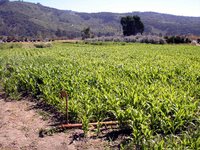 But I sigh with frustration, because being a conscientious locavore seems insurmountably difficult. Who can I buy from? What can I eat? How much can I eat? Do I care enough about all of this really? Maybe I should just forget all about this stuff and pop down to the corner grocery and get a bag of Cool Ranch Doritos and a six pack of Coke. 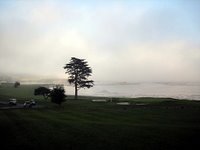 The fog rolls in like a rebuke, and I think, no, no, take advantage of living in the one place in this country where this seems even feasible.

We decide to put Earthbound behind us, having purchased nary an onion. We'll focus instead on an extravagant, but exquisitely prepared meal, designed for the sort of people who play golf in Pebble Beach. Dinner, in fact, was at the Stillwater Bar & Grill, at the Lodge at Pebble Beach. The Lodge. Golf. Different world from ours. 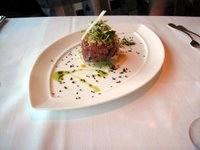 There's guilt of course, but it's delicious guilt. Tuna prepared beautifully with a touch of toasted black sesame seeds and perfectly ripe avocado. 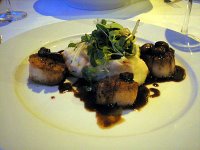 Perfectly seared scallops in a richly, flavorful dark sauce, with a potato puree and mache.

Not the same as the Basque feast, but we were thrilled with every bite as we watched the sun set through a mist of fog over the cove.

Yeah, this kind of life is good. 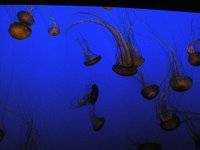 Of course, we can't leave Monterey without paying a visit to the amazing Monterey Bay Aquarium. I'm constantly flabbergasted at the amazing, strange, alien things that come from the sea. 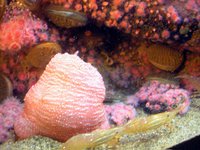 Are those really scallops lurking under that rock? Scallops like the ones we eat?

And live sand dollars. I love looking at the velvety sand dollars, which are vastly more interesting than the dead skeletons you find of this beast at the beach. 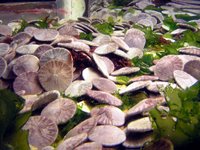 We also spend about twnety minutes standing at the OUter Bay tank, mesmerized by the ocean sunfish. 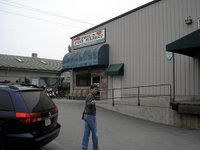 After all the abundance, we decided to stop at Phil's Fish Market in Moss Landing. It was a little bit tricky to find and seemed buried among the many sea-related institutions of the area.

Unfortunately, it was not the stinky fish market of my dreams -- I continue to search for the kind of place I remember as a child when my Dad took me through the old Fulton Fish Market. (I'm a New Yorker. We loathe change in our city, so the closure of the Fulton Fish Market is a crime, spoken of in the same terms as we refer to the demolition of the Old Met and the destruction of the old Penn Station.) 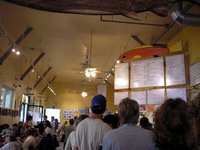 But I digress. Phil's. Atmospheric. Not as hopelessly crowded as Cannery Row, but not less touristy or less pricey. Eric ordered some blackened scallops and I got the fried artichoke hearts. Decent, but not much to write home about. 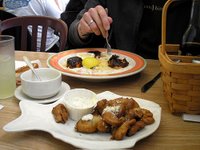 Curiously though, Phil's got a lot of press the week after we were there, with appearances on "The View," and "Road Tasted."