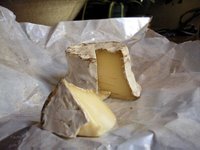 American cheese again. How happy am I to be cheese-obsessed at this point in the history of American cheese? I mean, I grew up thinking Kraft individually wrapped slices were pretty cool. Maybe it was that smooth plastic sheen and the way it held your fingerprints -- well, things weren't about flavor for me back then.

All I can say in my defense is, I didn't know back then what real cheese was like.

Pictured here is a lovely little Jasper Hill Farm soft-ripened round, made from "fresh, right out of the cow, uncooled, evening milk" and appropriately named Constant Bliss. It looks a lot like Chaource, but is, according to Jasper Hill, not like it in flavor at all. I'll have to take their word for it, since I haven't gotten around to sampling Chaource yet... 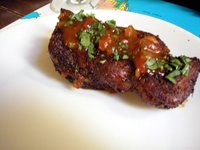 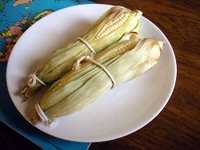 For dinner, we had Orange Chipotle Barbecued Ribs and lime roasted corn. I can't say it was better than the ribs slathered in lime sauce that we made a few weeks ago, but they were spicy good and well worth a try.

To trim ribs (if your butcher hasn't already), trim the "skirt flap" from the sinew side of the ribs. Cut off the breast plate and flexible feather bones that form the rounded part of the ribs. Remove the sinewy sheet of membrane from the back of the ribs by grabbing a corner of it with a paper towel and slowly pulling it away from the bones.

Dock between the bones with a fork (kind of like pricking a potato). Lay the ribs out on a large baking sheet lined with tinfoil (for easy cleanup).

Mix rub ingredients together and rub all over the ribs, top and bottom. Then cover with foil and let them sit for an hour.

Heat the oven to 250°F and slow roast the ribs for 1-1/2 to 2 hours. The meat will pull away from the bones slightly when they're done.

While that's going on, prepare the Orange Chipotle Sauce. Saute the onions in vegetable oil for a few minutes and then add the garlic and saute a few minutes longer. Add the other ingredients for the sauce and let simmer for about 30 minutes. Off the heat, stir in the cilantro.

If you're going to grill, prepare the grill by rubbing it down with a paper towel soaked in oil.
If you're doing it in the oven, preheat the broiler.

When the meat is pulling away from the bone, it's about ready. Take it out of the oven and uncover. Slather it on the top side with sauce and put it on the grill or under the broiler. After five minutes, take it off, flip it over and slather the other side. Then put it back in the heat for another five minutes. Flip over again and slather it one more time on the top side. Cook another few minutes until it's nice and crusty and tasty-looking and you can't stand another minute of waiting...