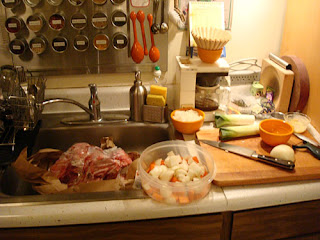 We've been at it again. This weekend we're scheduled for another Cooking Extravaganza-- this one might even qualify as a Cooking Lollapalooza.

Unfortunately this means I haven't had a lot of time on my hands to update the blog, but here are some tidbits and sneak previews of what's been going on in the world's smallest kitchen, and what's ahead.

To the left, Prep for our first step-- classic veal stock made a la Thomas Keller. That is, over three days. Ready set go.


Only a FEW of the veggies prepped. I was simultaneously making beef short ribs so we'd actually have something to EAT this week. 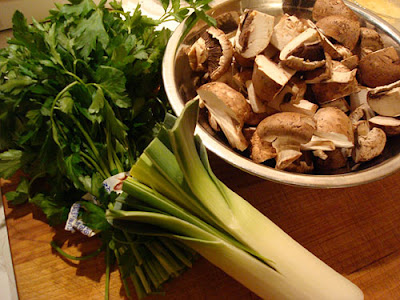 Plates, this dinner is my excuse to buy us some of those fantastic little mini-plates we get at Kamei on Clement Street. A buck each -- they'll hold our amuse of "borscht"-- a homemade beet chip with creme fraiche and dill. 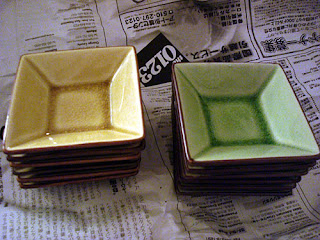 And soup spoons. I love these and finally I have a set -- at 69 cents a pop, it wasn't that much of a splurge. They'll hold an Herb Sorbet intermezzo. 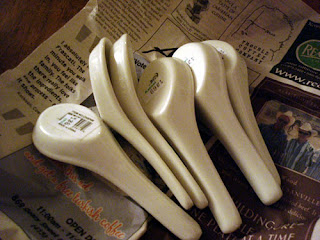 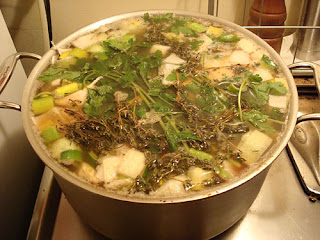 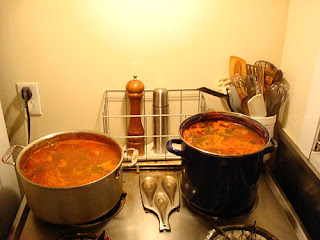 Bones at the last stage. They've been cooked twice, and now look like a serious puzzle for the CSIs. 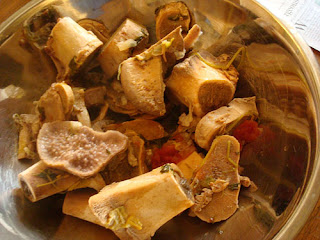 Down to the last stage, Day Three. Two separate veal stocks-- I won't even tell you how many gallons-- cooked and strained and then reduced to two quarts. 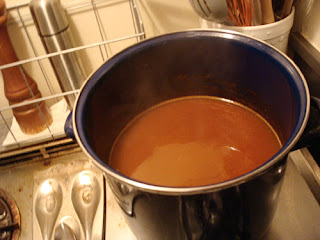 Ah, but the reward is sweet -- lovely glossy veal stock for our sauce. THIS is gonna be good. 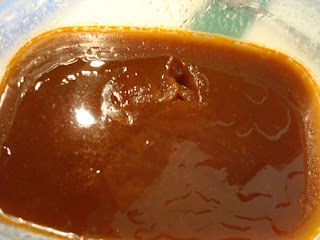 A wine candidate for poaching the pear that goes with our cheese course. More on that in another post. 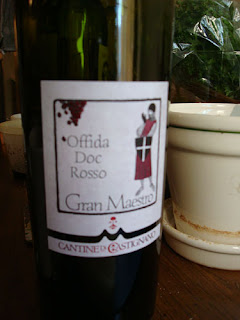 My Omnivore, honing his Duck breakdown skills. We usually get the butcher to do it for us, but the last guy at the Whole Foods counter, well, literally butchered our duck.

"I know nothing about it, but even I could do better," I muttered. 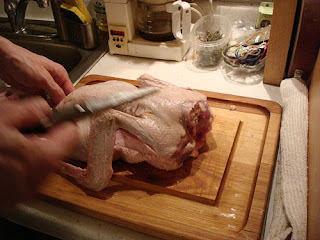 This time my Omnivore took to it, and did, it must be said, a fine job of it. We're making Duck Confit to go with a Sformato of Celeriac and Salad with Parsley Vinaigrette. 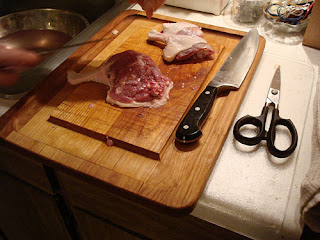 Irresistable happy kitty plates, also from Kamei. If the kitties get some duck, this will be the way they look... 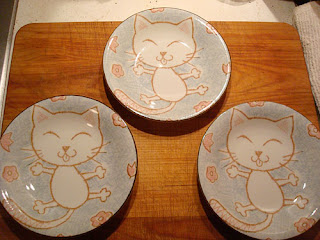