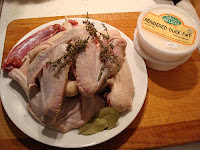 So we're gearing up for another fabulous dinner, and there's cooking activity--I say COOKING ACTIVITY-- going on in our house.

This event will be themed around the Elements-- our Hoch Ybrig souffles will be the "Air" course-- but I'm working now on "Earth." We'll be making cassoulet, which we've attempted on other occasions with varying results. I think we've nailed down a pretty good version, although there are many, many, many of them out there. It's still the kind of dish that you have to start Tuesday if you want to eat Saturday. 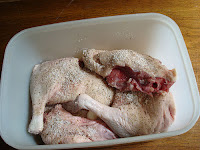 First and foremost, we have the duck confit. Mmmmmm... confit. I love duck confit... It's super easy to make, but it takes all day. TWO days really, if you count the time in the salt cure.

1-4 lb. duck, cut up into pieces (the butcher can do this for you, but ask them to save the neck and backbone)
2 Tbsp kosher salt
1 tsp freshly ground pepper
1 tsp dried thyme
5 cloves garlic, split lengthwise
2 bay leaves
1 lb rendered duck fat

Wash the duck thoroughly and pat dry with paper towels. Combine the salt, pepper and thyme. In a bowl or other container, put down one layer of the duck pieces and season liberally and nestle a few garlic cloves and the bay leaves on top. Put down the next layer of duck and season with the rest of the salt mixture. Cover tightly and refrigerate for at least 24 hours. 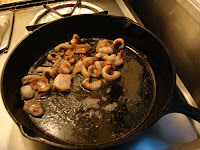 Remove the duck pieces and save the garlic and bay leaves. Rinse off the salt cure in cold water and pat the pieces dry again. Check the duck sections and trim off any extra-long flaps of skin and large lumps of fat. Don't throw those away! Cut them into smaller pieces and put them in a pan over a low heat to render off more fat. You can probably get up to another cup of fat for the confit this way.

When the fat is rendered, drain it off (save those crispy browned skin pieces and munch -- they're pretty yummy!) and, using the pot you'll be cooking the duck in (it should allow you to put the whole duck in it in a single layer), melt the extra pound of duck fat over a low-medium heat until it's liquid. 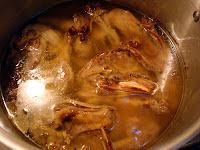 Submerge the duck pieces in a single layer in the duck fat along with the garlic and bay leaves, and a few sprigs of thyme and cook on the stove top until the pieces start to brown. I included the neck in with the rest because I wanted every possible scrap of yummy meat turned into confit. Then cover the pot and put it into a 200F oven. For about five hours.

Check in on the duck every so often. It's done when the meat is completely tender and can be easily pierced with a fork. 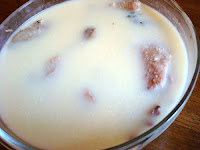 Remove the confit from the oven and let it cook slightly before transferring it to its storage container. If you've done it right, the pieces will be falling off the bone tender and therefore very fragile. Transfer them carefully to the storage container. If you're not eating the confit immediately and want to store it in the fat, filter the duck fat through a cheesecloth and use it to cover the meat completely. 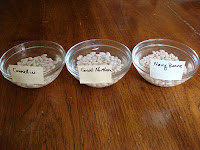 Since we're making cassoulet we also had some testing of beans to do.

Tarbais beans, which I understand are perfect for cassoulet, are hard to come by, and my next choice, little lovely green flageolets, were no easier to find. We tried navy beans as a substitute when we made a test cassoulet earlier last week. Hrm. Not so good. 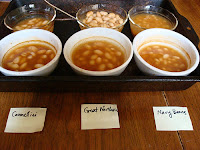 We tested three kinds of beans, Navy, Great Northern and cannellini, some soaked for 24 hours, and some soaked 12 hours. Then we cooked them over low heat in low sodium chicken broth for 2 hours.

For flavor and texture, the navy beans were right out. Watery and bland, they also were still too crunchy, even after 24 hours of soaking and 2 hours of cooking.

The Great Northerns fared better, especially the ones soaked for 24 hours, although there was something slightly grainy about their texture. For full flavor and creaminess, the clear winner was cannellinis, soaked 24 hours, and cooked 2 hours. So if we can't have the Tarbais or flageolets, then we'll keep the cannellinis as a worthy backup plan.

We've always had trouble with undercooked beans in our cassoulet and I have only recently learned that salt slows the bean cooking process -- nay, I tell you, it stops it. Acids, such as tomatoes, lemon, vinegar, etc., apparently will do the same. What's in cassoulet? Salted meat, salted broth, tomatoes, and lemon. My beans never had a chance, even after three hours in the oven. 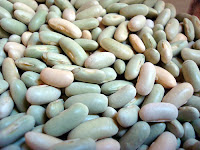 So now we're thinking that they need to be almost completely cooked before they even go into the cassole.

But, wait! The Bean Expeditionary Force is triumphant! My Omnivore made an trip to Rainbow Grocery and comes back with gorgeous pale green flageolets. Irresistible.

We have our cassoulet beans.