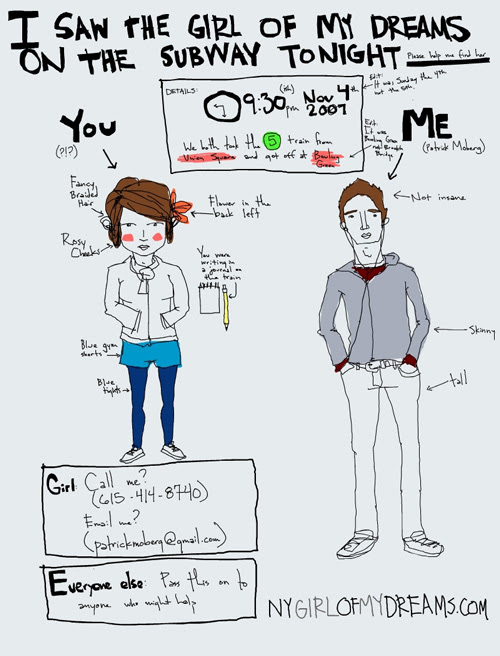 We've been out of the country of course, so I'm just catching up on this rather sweet story about a guy who saw the girl of his dreams on the #5 train on the NYC subway, but lost sight of her when they got off at the Bowling Green station.

Instead of letting his missed connection pass on, he created a website called www.nygirlofmydreams.com and drew this picture.

I know, this isn't a food-related story, but as many of our friends know, I owe much to the San Francisco public transportation system (line #22), so let's just say Patrick Moberg's plight hit a chord.

Lest we think he's too much of a stalker, he comes across as a genuine guy in a video posted on his buddy's site Vimeo.

The happy ending codicil to his story is that he found her (eight million people in New York, and it's still a small town). She's Camille Hayton of BlackBook magazine (ID'ed by a fellow intern at the magazine), and it looks like she likes him!