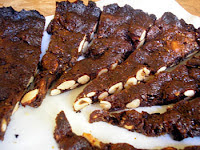 It gets mixed up with our cheese obsession occasionally, as it did a couple of weekends ago when we made dinner for Ms. Goat Envy and Ms. Jet Set.

A recipe for pan forte ice cream in David Lebovitz's book looked divine, so in the spirit of excess, we thought we'd pair it with actual pan forte (homemade, not from Siena) and add in Gorgonzola and Robiola to make it completely decadent.

Hm. Not a promising start.

But a bite of the thick pan forte, a spoon of the much lighter ice cream, and a nugget of robiola later, verdict was, "Oh my God, I can't stop eating it..."

This pan forte recipe is adapted out of Janet Fletcher's excellent Cheese Course book. When we go to Siena, I'll know how it compares to the real thing, but this version was pretty, though one couldn't eat too much of it at one sitting.

Preheat the oven to 350 F. Toast the hazelnuts and almonds together on a rimmed baking sheet
about 15 minutes, until they smell nutty and are lightly brown inside. Let them cool, then chop coarsely.

Reduce the oven temp to 300 F. and prepare an 8-inch tart pan by buttering the bottom and sides. This is very important! Then line the bottom with parchment and butter that too. The pan forte is exceptionally sticky and all this is going to make a big difference in how easy it is to get out of the pan.

In a large bowl, mix together the flour, cocoa, fennel seed, cinnamon, cloves and orange zest. When it's combined, stir in the nuts and figs.

in a small saucepan, heat the honey and sugar until the granules of sugar dissolve. Raise the heat to medium and cook without stirring until the temperature is 245 F on a candy thermometer. Immediately pour it over the nut mixture and working fast, stir until the dry ingredients are coated. It will feel like a thick sticky mess. Scrape it into the prepared tart pan and spread it out with a wooden spoon dipped in cold water. 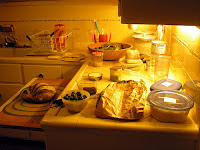 We do love cooking in kitchens with counter space though. So lovely. Really, is all that room for us to use? There aren't three appliances, two cutting boards and a precariously balanced broken light fixture competing for tiled inches? Oh frabjous day!

I was looking for a nice simple recipe to go along with out Coq au Vin-- or, I guess, after that Top Chef episode a month ago, I should say Poulet au Vin, as we are not using an old, icky rooster. (Tom Colicchio needs to give it a rest...)

I don't know about Mr. Molecular Gastronomy--his Tarte Tatin recipe doesn't seem to properly caramelize the sugar. He just softens the butter in a pan and then sprinkles sugar over it? WHATever --talk to the hand, Mr. B. I make the real thing.

However, I thought I could be large-minded. I sliced my potatoes into 1-inch slices and washed them in good faith. Then I realized that I couldn't make our thermometer work, and I asked myself, Are you really going to go through with all this nonsense? Um...no, a small voice answered. Well okay then, just boil the damn things, mash and puree, slosh in some milk and have done with it.

Know what? It was fine.

So herewith is the recipe for Pomme Puree that I did NOT make:

Method
1. Peel the potatoes and cut them into 1 inch slices. Run the slices under cold water to wash off surface starch. Heat a large pan of water until it reaches a temperature of 175F (you'll need to use a good-quality heat thermometer, with the probe placed in the water. Add the potatoes and simmer for half an hour being careful to maintain the temperature at 160F. Drain the potato slices and run them under cold water until completely cool.

2. Rinse the pan and refill with cold water. Salt the water and bring it to the boil, then lower to a simmer. Add the cooked, cooled potatoes and cook until soft. Drain the potatoes, then place them back in the pan. Shake the pan over a gentle heat to get rid of any remaining water.

3. Tip the potatoes into a ricer and rice the potatoes over a bowl containing the cold butter. Push the buttery riced potatoes through a fine-meshed drum sieve for a silky, light texture. You can prepare the purée in advance up to this stage and store it in the fridge. To serve, reheat it gently in a pan, while gradually whisking in a little warm milk.

Also on the menu for the evening, the infamous coq au vin. Someday I'll actually eat at Bistro Jeanty and try this dish for real. I had hoped to try it at Jeanty at Jack's (different location and website, same slightly disturbing accordion music) but was non-plussed to see Amanda Gold's review in the Chronicle which details a slide in quality. Guess I'll have to head up to Yountville.

Coq au vin, or braised chicken in red wine sauce -- whatever you want to call it-- is a nostalgia dish for just about anyone who's had it. Just even the faintest whiff of it always seems to call up memories and food stories. I love to make it-- I consider it one of the tastier things in my limited repertoire. It's also a reminder of why I'll never be a chef or have a restaurant: I just can't cook for people I don't like.

Many moons ago, I dated a guy, an architect. Nice man. Extremely talented at what he does. We'd been going out for a few months, and I was trying not to notice the signs of Relationship Creeping, that gradual process in which you observe that there are now a few of his shirts hanging in your closet, and later that a toothbrush has taken up residence in your bathroom. The alarm clock has now been set to the time he prefers to get up, and the cats no longer scatter when he opens the door. But you think, okay. I'm okay with it.

He was in the habit of taking me out to eat often, and I was okay with that too. It was a nice side benefit, but consequently, for those few months, I didn't really cook much at all. For Valentine's Day, however, I did the "slave all day over a hot stove" to make what I thought was a very elegant meal centered on coq au vin.

Served it up. As I was clearing the plates, I asked what he thought.

"I suppose it was alright."

Excuse me? There was a swift running dialogue that shot through my head at the blazing speed of light. Is he kidding? This food was fantastic. And even if it wasn't, as a freaking guest in my house--who's not, in point of fact, paying rent-- he's obligated to at least come up with a little more than minor enthusiasm. "Alright" in my book is so close to an insult, you might as well have just called it crap. What if this is how he's going to be now that we've Relationship Crept to "all his dry cleaning hanging in my closet"? I can't cook for someone who's lukewarm about my food. In fact, I can't live with someone for whom my cooking is just "alright." In fact, I don't think I want him staying for coffee. In fact, I think I want you to take your dry-cleaning and your toothbrush and get out. Now.

All that in the two heartbeats it took to lift the plate off the table. The relationship had died on the vine and I could tell by the way he stood up from the table that hadn't a clue that it was over.

Overreaction? Insanity? Hysteria? Probably. I broke up with him -- he was quite confused about it all. "What do you mean?"

I explained, and I'm sure it sounded insanely trivial to him (although obviously, I'm still sore about the whole thing to this day).

"But it was a joke," he said plaintively--and a little weakly, I thought. "I was joking. You're too sensitive."

Months later I heard through a mutual friend that he continued to be seriously confused over what had happened. In the logical part of my brain I think, surely there were other things that were at the root of the breakup-- it couldn't JUST have been about the coq au vin incident. But then I replay the thing in my mind, and I think, "Nope, it was all about the food."

If I seem a little distracted these days, chalk it up to vacation brain. In just a mere week, my Omnivore (who does like my cooking) and I will be joyously skipping (and hopefully not wading) through Piazza San Marco in Venice. 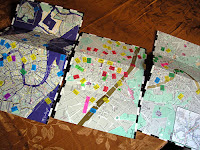 Of course, reams of research has been necessary to locate, um...food... My Omnivore took one look at my obsessive-compulsive tagging of ristorantes, enotecas, osterias, trattorias, salumerias, gelaterias, pasticcerias and mercatos for each city we'll be in and said, "Sweetie, we're only there for three weeks." In fact if we stayed for a year we still probably wouldn't be able to hit everything I want to get to. But we're going to try, by God.

We go to Venice, then Florence, drive to Montalcino for the Sagra del Tordo and then to Siena, finishing up in Rome. Along the way if we happen upon a nice macelleria in Panzano, say, or a truffle-eria (I just made that word up) we might just be forced to eat more. Stay tuned!