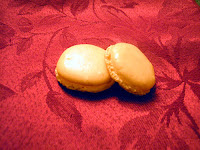 Although I haven't made an exhaustive study of them or anything (you'll have to consult Cindy of Food Migration about that.) I have my favorites. We're a little macaron-deprived over here in SF--as compared to, say, Paris, for instance -- although Pascal Rigo at Boulangerie Bay Breads makes some extremely tantalizing Parisian macarons, and I daresay they could probably compete favorably with even those from the City of Lights.

I've had Rigo's cookbook for a long time, and for some reason I've never attempted his macaron recipe. But after making many batches of ice cream this week (and yes, David Lebovitz, it IS your fault...), and separating many eggs, I felt that something had to be done about the mounting egg white emergency in our fridge.

The Omnivore is away for the evening. After four straight episodes of Law & Order, I'm bored. Let's fire up the oven, baby.

I was thrilled to discover that they are indeed as delicious as the ones you can buy at the boulangerie itself. 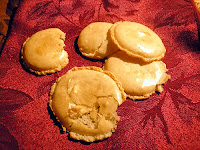 Plus, you get to eat all the ones that get broken. I mean, that's a rule, isn't it? Getting rid of the evidence??

Oh and that one.

And that one's too big.

And that one's looking at me weird... *chomp chomp CHOMP*