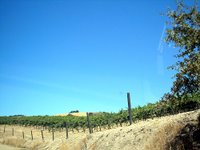 One of the reasons we went on this little jaunt of course, was so that my zin-obsessed husband could wrap his palate around the robust little wines that are making a name for Paso Robles.

A few months ago, his sister brought us back some phenomenal wine from a place called Zin Alley (more about them later) and so we thought, why not check out what all this Paso talk is about, anyhow?

Neither one of us has ever been to Paso actually. I've passed through of course, as most people have -- you know, as you drive at 100 miles an hour between LA and SF, trying to get home before nightfall. 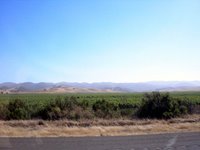 On the way though, we couldn't help noticing the HUMONGOUS vineyard visible, well, pretty much everywhere on the drive between King City and San Miguel. Covering some 12,600 acres, this giant parcel runs south of the Salinas River. It's the largest contiguous vineyard in the world and it's owned by the Indelicato family, who makes Delicato Wines. Here's an article with more on the vineyard. 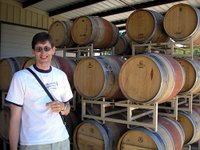 It seemed, there was a lot unexpected about the region and we had a lot to learn about the wine-makers of the Paso region. We decided to concentrate on the part of the region west of Highway 101. It seems you can drive along Vineyard Drive and hit a winery every ten seconds these days, although in the not so distant past, we were told, only twelve wineries really held sway in Paso. I'll leave the serious discussion of the wine to my better half, who has the palate of the family. But I'll mention the places we visited -- and there were some fun ones! 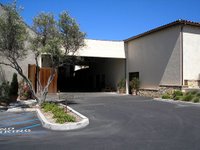 Our first stop was at Turley Wine Cellars. We'd read about the 80-year old vines that were part of the old Pesenti vineyard, which Turley acquired in 2000, but that was about all we knew. For a first stop it was not a bad choice, and we found the staff in the tasting room helpful. I was a little dubious though, about the obvious corporatization that's moving into an area that I'd hoped was a little less "Napa." Of course, Turley started out further north near St. Helena, and they've been making wine all over California is what I read, and the experience shows in the wine, which was very polished. 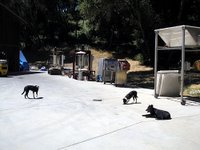 Even though we had our own short list, we asked at Turley which other wineries she would recommend. One that sounded interesting was Linne Calodo, which Matt and Maureen Trevisan started back in 1998. After a little bit of back and forth, we drove through an unmarked gate at the intersection of Highway 46 and Vineyard Drive, and as we came up the dirt road, we were immediately surrounded and, well, herded, by the winery's three border collies, Bear, Blue and Marley.

It was a Thursday, and we didn't realize we were barging in on a day when the winery's tasting room wasn't actually open. But they very kindly let us invade, with our furry escort leading us on. The Trevisans make a fantastic Rhone-style blend called "Sticks and Stones" that is definitely a wine to keep an eye out for. This small producer makes only about 800 cases a year, and it's well worth seeking them out. We bought a couple of bottles, and chatted for a bit about where we were planning to visit that day.

"You sound like you're going to a lot of places, would you like a box so your wines aren't rolling around in the trunk?" 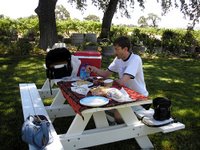 Despite its growing popularity, Paso is, as it turns out, a bit different from the more corporate wine regions, we decided. People are warm, and the relationship between the places seems less viciously competitive. They'll send you to the guy across town, chat for a while, offer advice on food. It reminded me of when I first came to California and visited a -- then -- unknown place called Ravenswood, where the tasting room was a fold-up table in the fermenting room next to giant vats of pungent wild looking stuff. Ravenswod is still nice, but let me tell you, the tasting room looks a bit different now.

But I digress. We had a nice picnic lunch at Peachy Canyon (more about picnics here) which made a nice respite from the heat and dust. The Peachy Canyon label you can find locally, and we were pleasantly surprised bytheir Cab Franc which had a lot of peppery flavor. 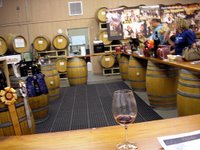 From there, we hove to Opolo Vineyards, where we ran into one of those group limo tours. Did I say the place was becoming more popular? Eric restrained himself manfully and didn't purchase any wine here (no reflection on the quality of Opolo's estate-produced wines), but moved us on a few hundred yards to our next stop along Vineyard Drive. 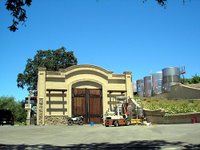 "Monster" Zinfandel was the attraction of our next target, Norman Vineyards, which I immediately appreciated for their wildcat logo. Established in 1971, Norman is one of the older wineries in Paso, and certainly a friendly stop. 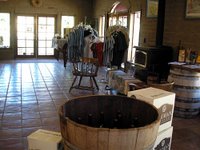 Jo, our host in the tasting room poured us two irresistible little gems: a lovely 2003 Syrah and a Mephistopheles Zin that Eric kept smacking his lips over. 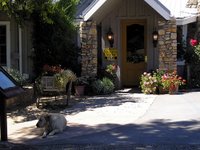 At this point, I was sensing that we were reaching a limit, budgetarily as well as palate-wise, so we hit only one more place that day -- Justin Vineyards, which I expected to be a bit of a touristy spot. Their Isoceles wine we'd read good things about, but the place has an "auberge" and restaurant, and a shop. Exactly the sort of place that would have made Paul Giamatti cranky in "Sideways." 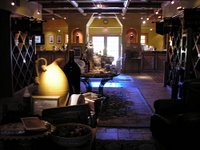 Nevertheless, we did enjoy the wines, which you can find in lots of places around the Bay Area, including Cost Plus, the Jug Shop and the Ferry Building's Wine Merchant. Some may recognize their name from the disastrous fire at Wines Central in Vallejo last year -- They lost 17,000 cases of wine. (The maker of our favorite California blends Orion and Pleiades, Sean Thackrey took a massive hit in that same fire."

Well after Justin we were tuckered. Literally drained by the sun. We're from Fogtown San Francisco, so we don't really know what that big bright thing in the sky is. We went back to the hotel and collapsed for an afternoon siesta, which is a tradition I think is cerainly worth importing here. 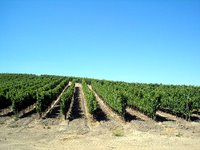 Well, the next day, we went on non-wine adventures to Hearst Castle, and to see Elephant seals. (more on that in another post) but there were two places that had been closed on Thursday and that we couldn't possibly miss. 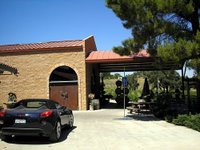 One was Zin Alley, already mentioned above. The place is a small producer run by Frank and Connie Nerelli. Frank's family, as it turns out, owned the Pesenti Vineyard, the same one which got sold to Turley. But winemaking is in the blood and after making wines for Pesenti and Turley, he acquired his current piece of land, which he dry-farms ("Let the vines do the work" is his motto) and from which he gets one of the most terrific zins we've ever tasted.

Frank's a character -- while we were there, he chatted about the area and noted that he wasn't on any wine maps.

"Oh, you won't find me on any of those," he says waving a hand dismissively. "I had us taken off of all of those. I think there's still one that we're on -- they wanted to do a map of every winery in the area. Can't do anything about that. But I'm off all the other ones."

So you won't see Frank's Zin in Safeway any time soon, and he doesn't have a wine club ("Nah!") but he's willing to mail you wine ("Sure, give me a call. Mail you anything you like!")

He also makes a superb port and a fabulous dessert wine called "After Hours." 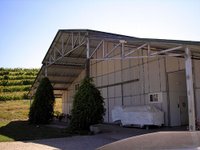 Our final stop on the wine adventure was the appropriately-named L'Aventure, the winery of French-born winemaker Stephan Asseo. You can read all about him on their site, and how he found this region when he was looking for a place that duplicated conditions in his native Bordeaux, where he began making wines. Stephan wanted to experiment with his wine, which is um.. not encouraged in Bordeaux -- so he came to Paso where he'd have license to mix his Cabernet Sauvignon with Syrah if he liked. Which he did like. And we like too. It's called his Optimus, if you're interested and it's terrific, as is his 100% Syrah. 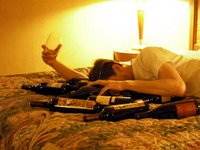 "Drink now, and for the next few years," they say.